This is a sample clip from one of our earliest shoots (Playing with Emily), of Emily being a giant smartass under duress. 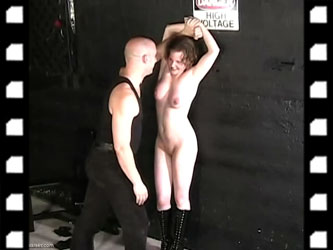 I thought it might be nice to give a sample of the video and audio quality of our older stuff, both so people won't be scared off by the 'older' label, and for comparison. This far back, we had a single inexpensive camcorder with its built-in mic, and a couple halogen worklights. This particular shoot remains one of my very favorites we've done (both for fun and for hotness), but our technical quality has improved a lot since then.

We're posting shoots very much out of order, if you want a sense of how old a shoot is look at the number. 'tbm02' is the oldest and 'tbm48' is the newest at the moment. I think our equipment timeline is something like:
tbm02-: halogen worklights, cheap camera, builtin mic
tbm04-: slightly better lights, external mic
tbm10-: shiny new camera, good external mic
tbm11-: start shooting two-camera
tbm13-: much better lights
tbm16-: even better lights
tbm23-: better second camera
tbm35-: second really good external mic

We also brought on a much better editor around tbm15- Red has edited most of our video since then, and I think she does a better job of telling a story than I do.