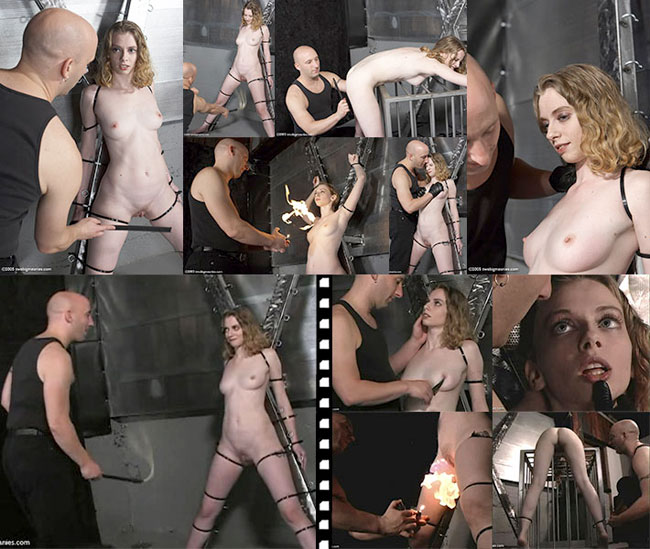 I'm not so much about bondage usually- it's more a means to an end (cute helpless girl) than a scene in itself. I do like zipties though. This scene is more about bondage rather than our usual roughhousing, but we also played nice and hard. Nikki was really pretty immobilized in the setup we kept for most of the shoot, and I did mean things to her exposed like that. I'm very happy with the result!

We started out experimenting with rigging- initially her arms were up following the X of the steel cross, but that just wasn't sustainable (we kept a few pictures though). Once we'd figured out a good position, we started playing. I used a horsehair whisk to target practice on the hood of her clit to make sure she couldn't go anywhere. ^-^ Then we _really_ got started...

(Incidentally, if you've looked at her headshot on our models page and wondered about the little black halo over her head, that was from this shoot. We set up a ziptie to keep her head from falling back between the pokey metal bits on the cross.)

Nikki isn't a fan of sting, she'd much prefer thud (cf the nice orgasm from flogging in 'Introducing Nikki'). I did want to push her though, so we went back and forth. I used a couple different paddle-type things on her breasts, thighs, and cunt, plus a bunch of slapping and other fun with my hands. I also spent some time tracing a sharp knife over her exposed skin. Nikki makes great sounds, and when you push her hard, her lower lip trembles _really_ nicely. I asked the video folks to make sure to catch that, and they did. ^-^

Some of this shoot is a little edgy looking- we've done some heavier shoots intensity-wise, but there ended up being some scary-looking imagery in this one. The knife against her cunt, a bit of gently hitting her pubic mound with my closed fist, the look on her face while I was giving her some hard slaps up between her legs... The connection between us while we're doing it all is really visible, though. I think for me that's the hottest part of the scene, watching her struggle to process while looking right into my eyes, the back-and-forth of energy.

I could have kept going with that part of the scene for about 497 years, including things we can't show on video but that Nikki and I would certainly enjoy. We had other stuff we wanted to do, though. She has a really cute butt, and you couldn't see it with her against the rack like that. So, we thought we'd take a break and bend her over a metal cage, ziptie-ing her ankles and wrists to it. While she was fastened down, I started working over her ass with a sap (which was really tough to handle), then switched off to a nice thuddy flogger.

Nikki had never played with fire before, and was curious about it. So, eventually I used another ziptie to tie her hair up (fire + loose hair = bad), and fastened her back to the rack. Since this part of the scene wasn't going to be very long, I fastened her arms over her head the way we'd started, albeit in a slightly easier position. Fire's not really painful the way we did it, but it certainly gets the full attention of your hindbrain! We didn't get many pictures or much video of it, fire is tough to capture, but I think there's still enough to be worthwhile. Nikki liked it and expressed desire to do more, but we've never gotten around to it...

Hope you enjoy this- please go buy the stills and video in the store! There's a button up above that'll take you there. ^-^