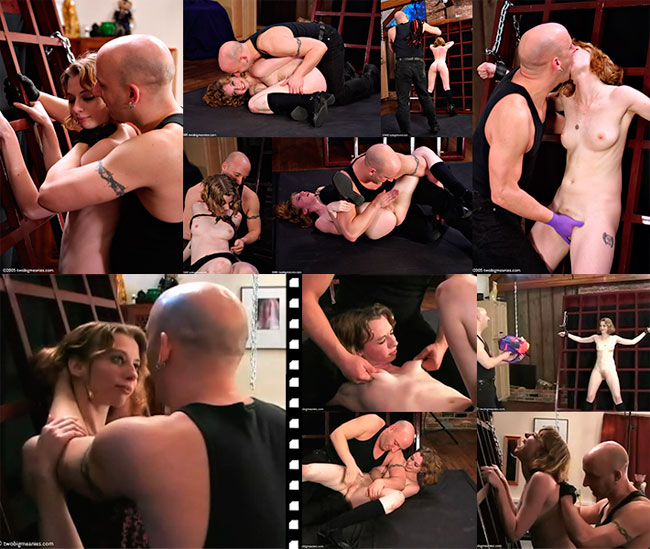 This is another of our medium-older scenes- the first one with Nikki, and one of the first two-camera shoots (the first ones were tbm11a/b/c with Madison). Nikki is a play partner of mine in real life, we had a blast. We both love to wrestle, she weighs maybe 70-80 pounds less than I do but is nice and tough. That's a good combination because it means that a) I'm going to win a lot, and take advantage of her while I do, and b) she can take it. It did end up being more of a challenge than I'd expected because she's _extra_ bendy. I'd put her in some inescapable arm bar, and she'd just turn around and poke me. ^-^ There's plenty of good banter and playfulness during the wrestling, mixed in with some good rough play.

So here's an entertaining thing- Nikki can get off from being flogged. Flogging is one of my most favorite things to do, I teach occasional classes even. We'd played a number of times before this. But I'd never touched her with a flogger before this shoot. I have no idea why, we've made up for it repeatedly since then. ^-^

We tried something silly-but-fun in the middle of this shoot, between the wrestling and the flogging (hmm, somewhere else in there was her getting a nice orgasm from my hand while up against the rack). I've got a gatling-gun-type toy that shoots foam rubber darts (made by a huge company with scary attack lawyers that probably don't want me to use their name). I tied Nikki spread-eagled to the rack and used her naked body for rubber-dart target practice, and oh-my-god-the-fun! She was more on the 'amused' end of the scale, except for when the darts hit particularly sensitive bits, but I could have done that for _days_.

One other random observation that doesn't really fit in anywhere- Nikki does this thing when she's having a hard time (not necessarily a bad hard time, I've see her do it when she's about to come a few times). Her lower lip sticks out and trembles visibly, it's one of the sexiest things I've ever seen, and completely unconscious. Doesn't come across at all in stills, but it is beautiful on video.