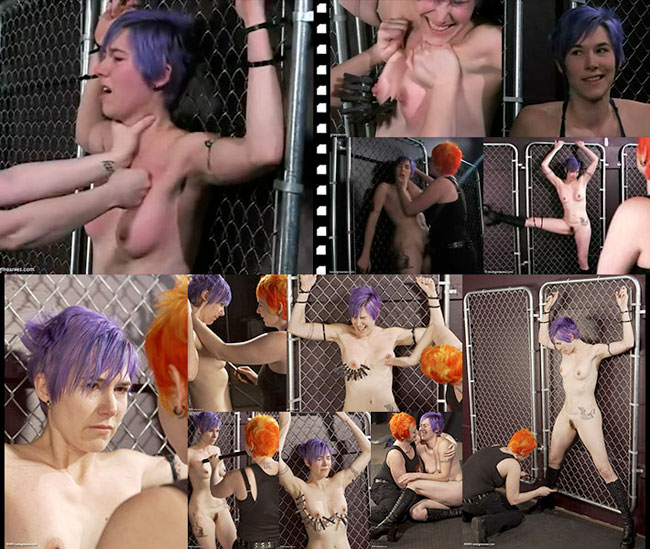 We've done a lot of fun shoots over the past few years, and I have accumulated tons of great memories, but if I had to pick a very favorite, this would probably be it. This may also be the hardest I've ever pushed someone on a first scene, but Candy's and my connection was so good and she was so very articulate about her wants and needs that it just made sense to take us both where we wanted to go!

Candy and I have known each other for years, drifting around in the same sea of local perverts, but we had never played together before this scene. We both began to regret that wasted time when we got together to negotiate this shoot and realized that we were, in her words, "almost the same person." Our conversation revealed that we like to play in nearly identical ways, to the same levels of intensity and for the same reasons. That promised well for our scene--a promise that was amply born out.

Both of us forgot that the cameras were rolling pretty much immediately. We played hard and happy and with great chemistry until we were both completely worn out. I pushed her to tears a number of times, so if you like crying, this shoot will please you!

I started by securing her to the chain link fence with cable ties. That's intense, narrow bondage, but she looked gorgeous in it. Candy is a personal trainer, and I wanted to showcase all those lovely muscles.

I didn't use a lot of toys on her--I wanted the intimacy that hands-on torment can create. I warmed her up with faceslapping, hairpulling, deep muscle grabs, and solid impact from a pair of sap gloves. (The gloves, thick black leather with lead shot sewn into the knuckles, are among my favorite things EVER. They make a lot of appearances on the site.)

Whenever things got almost too intense, I switched to knifeplay, tracing the blade along her skin. That brought her back to me each time--another thing that Candy and I have in common is a love of pointy things. ("It's like sex for me," she said during our negotiations, pretty much guaranteeing that I'd use it at any opportunity!)

I also ran a couple of "zippers," rubber-tipped clothespins strung together on a line, underneath her breasts. I knew that those would be challenging for her to take. She doesn't process clamps as well as she does impact, but she took them beautifully. Her reaction to their abrupt removal was gorgeous, and inspired me to put them to the side to use again before we finished.

We took a bit of a break to rehydrate and snack. I was anxious to get back to it, though, and I think she was, too. When we began again, I asked her to extend one leg out against the fence as far as she could comfortably maintain it, and then used the flex cuffs above and below her knee to secure it there. That position left her cunt extremely exposed, which was just what I had in mind.

Once I was certain that she was safely bound, I started slapping her cunt, medium-hard at first, and gradually increasing in intensity. I told her that when she had absolutely had as much as she could take, to tell me and I would stop...but I would re-attach the zippers, this time beginning on the tender skin under her arms. She had told me before we shot that clamps under her arms were extremely tough for her to take, and usually made her burst instantly into tears.

She made herself take the cunt-slapping for a long time, pushing with everything she had and visibly struggling with it toward the end. By the time she asked me to stop, she was crying hard. The zippers brought out a fresh bout of tears as they were going on, so you can imagine (or better yet, watch!) how they were coming off.

I cut her bondage and brought her to the ground to cuddle while she bounced back to give a post-shoot interview. I was every bit as endorphin-high as she was by the end of things!

I devoutly hope that we get to have Candy back again soon. Russell has shot with her since we did this one (check out Reaction Shot if you want to see another hella hot scene with this yummy woman), but I haven't gotten my hands on her in too long. *g*