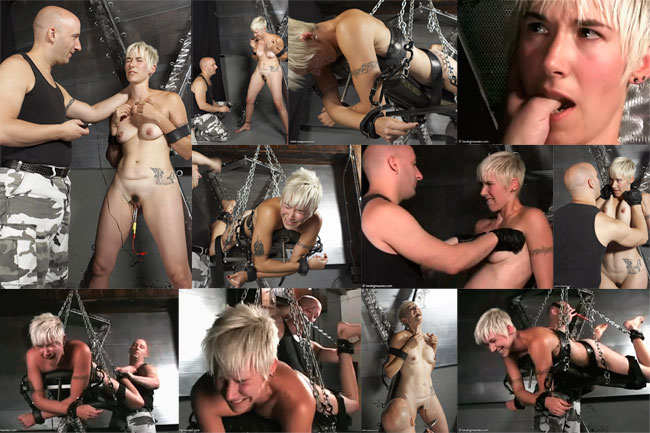 This was a two-part scene, both things I was afraid wouldn't come across on video. First part of the scene was Candy against the rack with me doing mean things to her with a TENS unit. Second part was her suspended on a neat piece of equipment that put her feet at just the right hight for me to do mean things to them. It ended up being an intense scene that worked very well, both for us and in video and stills.

We'd actually tried this shoot the week before and ran into some difficulties, had to postpone it to the following week. We'd come up with the plan looking for ways to get good intensity (which we both like) without a bunch of marking, since her mother was in town. The second time 'round we didn't have that limitation, but we were both so excited about the original plan that we stuck with it.

Electricity was new to her, but Candy and I had a good time with it. I was afraid it wouldn't look very exciting ("ooh, he twisted the dial again!"), but her reactions are hot and there's no problem telling exactly what's going on. I had a bunch of neat ways of attaching leads to her, it was even photogenic.

The second half of the scene was me poking, slapping, etc her feet (including using the pokey-zappy-thing, as Lauren and I call it, which I had somehow _completely_forgotten_ during the first part of the scene). It was some really intense play- we actually toned it down a little in the edit. I like pretty girls crying. ^-^ If you don't, you might not like this update. Candy gives _great_ interview though- I think we would have toned it down more if she hadn't been able to so clearly talk about how and why her experience was really good.