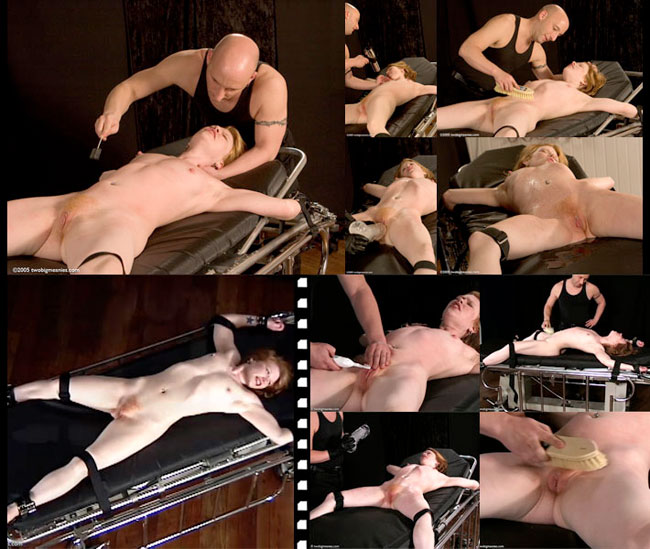 Madison Young looks damn fine strapped down on a gurney. That could have almost been the scene by itself. I had these ideas for mean things I wanted to do to her, though, and having a pretty girl helpless and open like that invites certain... abuses. ^-^

The gurney belongs to a friend of ours. Once she was firmly attached, I got out a nice stiff scrub brush. The first few passes with one of these aren't bad, but around the Nth pass, skin starts getting pretty sensitized. Following it up with other sting toys, and an electric toothbrush (really! I'd filed off the guard on the back of the head, so it had both a hard vibrating bit and the vibrating bristles) meant a pretty intense scene. Finishing her off with first a chunk of ice, then a cast ice dildo several inches around left her shivering pretty hard (small girl = little body mass to retain heat). Nice guy that I am, I helped her warm up afterwards with a hair dryer, on 'high', a little closer to the skin than you might normally go.

I really like shooting with Madison. She's small and cute, game to try pretty much anything, and tough enough to handle it. I had some hot ideas I wanted to try out with her, to see how they came across on camera, and I think it worked pretty well.

The first time she was up here, she ended up with a fair number of marks. This time, one of my goals was to do less visible 'damage', but push her even harder if possible. She'd been able to take quite a lot- the limiting factor in our scenes was bruising rather than her processing skills. Normally what I'd use for a lot of pain without excessive marking is electricity, but one of her few limits is electrical play. So, I had to get creative.

Abrasion play is interesting. The first few swipes with a stiff brush over sensitive skin take the dead skin off and wake the nerves up. After that, it can get pretty rough. You can add other sensations (say heat, or cold, or both), and they all just build on each other. The one tricky bit is that if you work a single spot too much, you can get down through too many layers of skin (I had an unfortunate incident once, playing off-camera with Lauren actually). So, I had to make sure I distributed the scrubbing really thoroughly over her entire body. It was a tough job, but I think I managed.

We did a couple stand-alone little bits with her after the full-length scene, one of them was a friend of ours suspending her while Lauren and I worked her over with squirtguns. Thus, Madison is dripping wet and wrapped in a towel in the exit interview with Lauren and I, and we're talking about the whole thing. I'll try and get that bit up in the next few days...