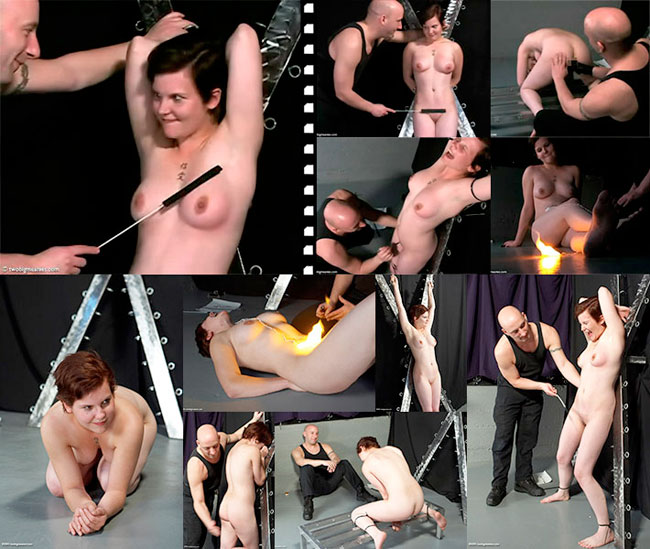 Emily is _adorably_ cute. We didn't particularly plan out this shoot, just played with the stuff we both like. Lots of play with sharp metal things, impact on sensitive bits, etc. Much of the first part of the shoot she's not restrained at all, on purpose so I could watch her struggle to hold still while I did terrible things to her. ^-^ She was a good girl but did squeak and squirm quite a bit, so eventually some bondage was needed. Once she was pretty immobile, I told her to shake her tits for me or I'd do more mean things. That was of course grossly unfair, but she did her best.

The second part of the scene included a first for Emily (imagine, she'd never had someone smear tiger balm in her asshole). This got intense pretty fast, but we were able to recover nicely. We finished with some unique uses for flash cotton, read on for details...

I've got a friend who's been experimenting with spinning flash cotton into thread. Months (and months and months) before this shoot, Emily and I had played very briefly off-camera with setting the thread on her and igniting it. She'd thought this was just the coolest thing since sliced bread, but moved away before we could play further. She came back for a visit and this shoot, and she was _really_ excited to have a chance to play with it some more. It worked quite well, we used it a few different ways. I think my favorite was having her sitting on the floor to light for herself the end of a long 'fuse' running along the floor to her feet, then back up along her leg to a pile of loose flash cotton sitting on her pubic mound. Taking an action to initiate something you're scared of is a lot tougher than having someone do it for you, and she also had plenty of time to think about it while the fuse burned. Fear is hot. 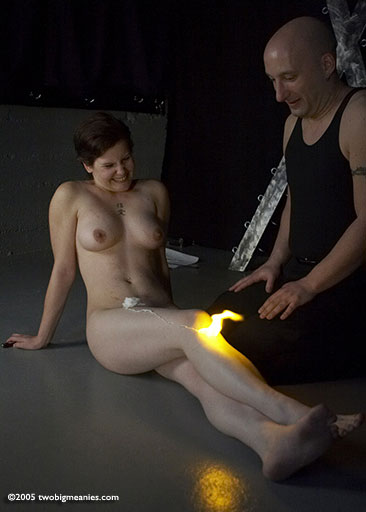 IMPORTANT SAFETY NOTE: This was fun and sexy, Emily had a (ahem) blast and wants to do it again, but I think I'd stick to loose cotton if I were to do this another time. Spinning the flash cotton down to thread means it burns slower. That's handy for psychological effects involving duration, but means there's more heat transferred. The sensation is thus more intense (which Emily also liked), but also involves a greater risk of burns. We'd played with it before and she'd had no marks, but this scene left some surface marking that I gather took a few weeks to go away.