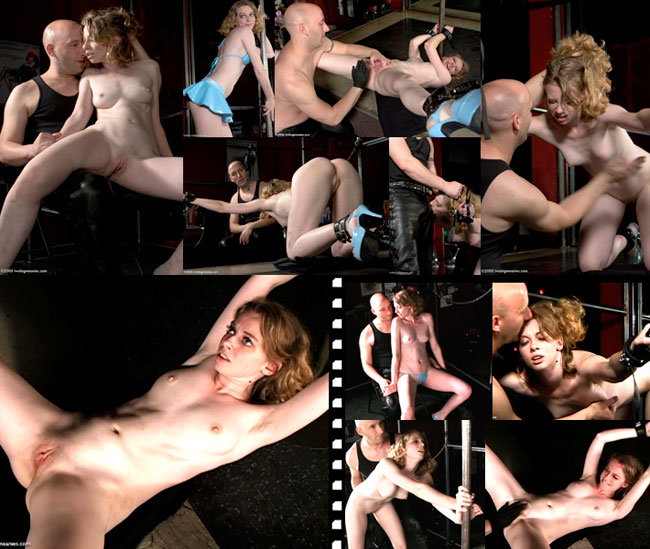 This is one of my favorite scenes we've done. As we know, I'm generally much more about roughhousing than bondage, but I had a couple ideas for this shoot. We got some hot bondage positions and some _great_ play out of it. Nikki works as a dancer, we rented a local club to shoot in. Started with a lap dance with a little more contact than usual *g*, then chained her up against the pole, then took advantage of the railings and platform to put her into two bondage positions that served my kinks perfectly.

The rest of the scene was fun, but I'm going to go on about those two bondage positions. ^-^

The first had her kneeling on a platform with her ankles chained behind her to a pole, and her wrists tied out and forward to railings a few feet away. She's light and strong, I was concerned that this wouldn't be maintainable for very long but she stuck with it for quite a while, holding a fair amount of weight with wrists and shoulders. The position meant that her breasts were hanging down and very vulnerable (she couldn't pull away much), so I slapped hard and pinched hard and pulled hard quite a lot. She's got beautiful tits, and they were bright pink after several minutes of this. The position also put her ass in the air, which I took further advantage of.

The second position flipped her over and swapped wrists and ankles- her hands were tied back over her head to the pole, and her ankles were held way out to the sides. She was thus held wide open for some of our best pussy spanking ever. Nikki can get off from having her cunt slapped, but being inescapably open and unable to close her legs like that made it a _whole_ lot tougher. She went back and forth between orgasms, screaming and struggling, and some very piteous pleading looks, for a long time.

There's also an extra entertaining moment in the outtakes for this one. It was hot, my hands were sweaty and I was having trouble getting gloves on, so I had to run to the bathroom for towels to dry them. Nikki hung out in that last bondage setup, but made some comment about "well, maybe I could sing a little song." Maxx really liked the idea of her singing 'Amazing Grace', so we have video of a really hot girl singing a hymn while in a very explicit bondage tie. The key changes a few times, but you try singing while lying on your back with your legs in the air...

Anyway, one of my favorite shoots, and I hope you like it!