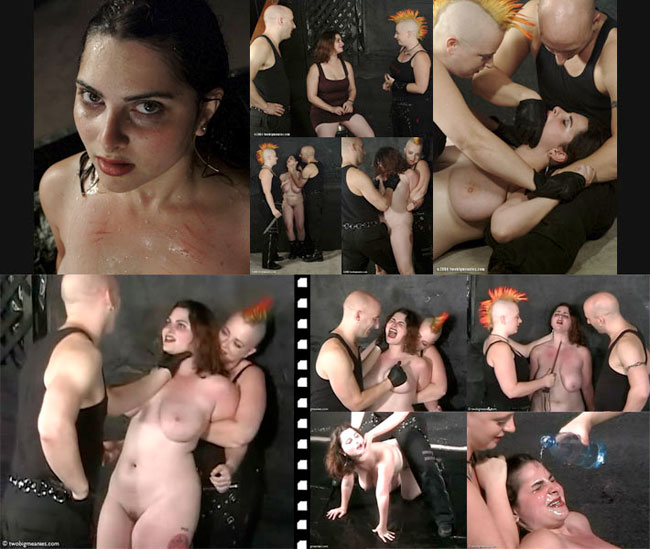 This is another of our much older shoots, with our friend Kelly. Lauren and I had had a wonderful time co-topping her at a private party months before (thanks S!), and wanted to explore those possibilities further. Kelly was quite happy to oblige.

The focused attention of TWO big mean people can be pretty overwhelming. Normally in a scene with one top and one bottom there's a little bit of contest to steer the scene, but with two-on-one most of the time the bottom can just enjoy the ride. ^-^ I say most of the time because if the two tops aren't able to sync up the contest ends up being between them, and it's not so fun for anybody. Fortunately, Lauren and I did a good job of this one, and Kelly had a blast.

Have I mentioned how much I miss the wall in the basement where we used to shoot? We spent most of the scene working off that wall, taking turns holding Kelly while the other person did mean things to her. She _loves_ deep muscle grabs and strikes. We did a bunch of manhandling, punching, and even some tossing her back and forth between us. Lauren terrorized her with a really big knife for a while, but pretty much the whole scene other than that she was actively struggling. This meant that Lauren and I had a great time, too...

We finished up with some water play- the scene we'd done at a party that inspired this one was built around Lauren and I finding out just how much water we could get Kelly to intake (and when she just couldn't drink anymore, how much she could osmose). That was outdoors- for this, we laid down a tarp and took turns pouring water over her. If you hold someone in place, and slowly pour water over their mouth, they can alternate drinking and breathing for a while, but eventually they _will_ start to panic. Kelly has exceptional control and managed pretty well, but still ended up quite thoroughly soaked.