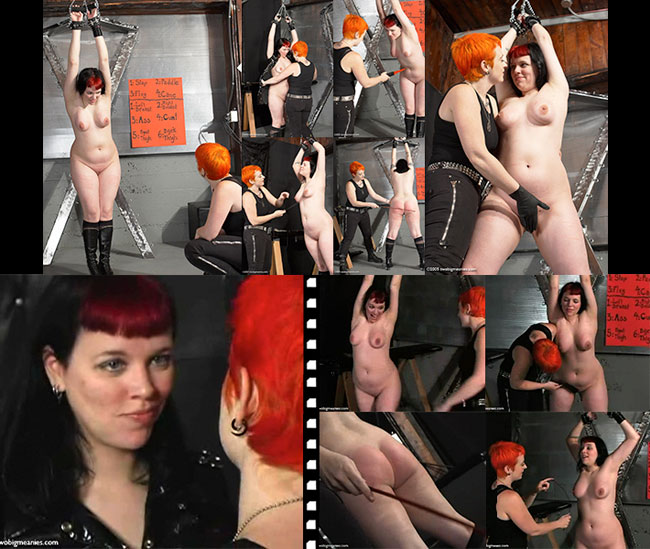 Playing with Dreina is always a great pleasure for me. We have happy, effortless chemistry (the result of years of off-camera friendship) and a fun sadist and brat dynamic. :) She's willing to try just about anything and she loves impact play, which is definitely a bonus! She's one of my favorite bottoms for doing lighthearted, silly-but-intense scenes with - scenes like this one, in fact.

I thought that it would be entertaining to put a new use to my gaming dice. (I can hear you snickering. Stop it.) I assigned a body part to each value on the 6 sided die, a mean striking implement to each side of the 4 sided, and used a 12 sided die to determine number of strokes. Of course, I cheated outrageously, but Dreina wasn't really in a place to complain. *g*

I had a nice big chart that helped make it look as though I wasn't just making up the rules as I went along. I was, of course, but the chart made it seem like everything was above board. We started off with a pre-scene interview and a review of the rules** of the game.

I did actually have one "hard and fast" game rule: that anytime Dreina made a smart ass comment, I was going to paddle her mercilessly. If you've seen any of the shoots that we've done with her previously, you'll know that this was akin to telling her that she was going to be in trouble every time she inhaled.

Once I had her firmly attached to the ceiling, I gave her a taste of a few of the different implements so that she would know what the stakes were - no, that's a lie. I just like swatting her.

The first implement that came up was the paddle, a toy that Dreina is intimately familiar with. The thin synthetic cane that followed it was a new sensation for her, though! It's some of the most pure, wicked sting that you can imagine, and it's light enough to use on delicate areas. It leaves lovely welts, too.

Somehow, Dreina kept rolling 12's--the highest amount of strokes possible. Isn't that strange? Of course, I might have been helping the dice along... just a bit.

She also kept rolling for canes, so she was developing some nice stripes all over that lovely skin by mid-scene. When it seemed like a short break from impact play was called for, I chased her around with the "poky-zappy thingy." It's too bad that the lights were too bright to capture the sparks arcing from the tip of it, but at least we got the sounds (both the *pop* of the toy and the indignant noises from the girl) on the video.

This went on for quite a bit--she'd roll the dice, I'd change them to whatever number suited me, she'd complain, I'd paddle her for complaining, and then I'd swat her nice and hard with a cane, paddle, flogger, or my hands.

Earlier in the shoot, Dreina had promised me that she would give me anything I wanted in exchange for refraining from I-don't-remember-what-dastardly-act. I decided that what I really wanted "anything" to consist of was tethering down one ankle and then slapping her cunt a bunch. I knew that it would be tough for her to process--all the impact we did there had been--but I also knew that she could do it and that seeing her struggle would be extra-hot.

**I get to do whatever I want and you get to take it because you're chained to the ceiling.