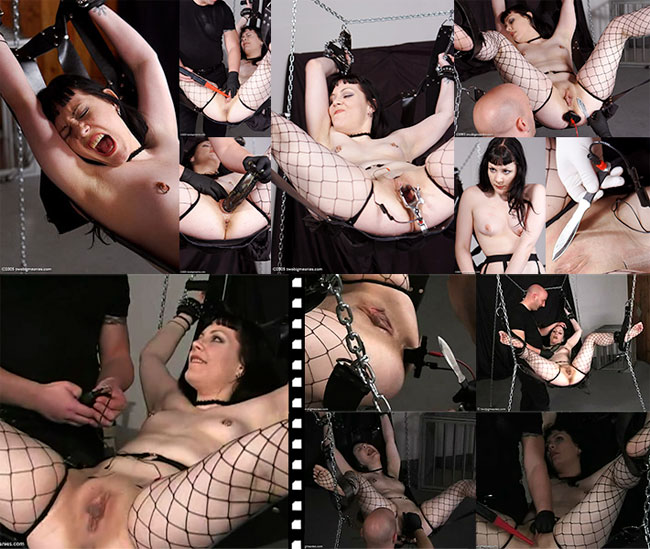 London is a friend of ours who really kinks on medical play and sharp, shiny things. I'd done a shoot with her before focusing on that, but I had another idea. A local SM shop (unfortunately no longer in business) had a 'extra-scary-things' cabinet with some interesting toys in it. The two that had been catching my eye lately were a stainless-steel speculum with terminal for attaching electrical leads, and a knife similarly equipped. I was looking for an excuse to buy them, so I called London and asked how she felt about electrical play. Surprisingly, she hadn't done much, just a bit of messing around with a violet wand. One trip to the store later... ^-^

We spent pretty much the whole shoot with her in the sling (other than a brief break where I chased her around it), in just the one position, but it doesn't feel monotonous. We used the electrified knife, electrified speculum, an electrified butt plug I already owned, regular contact pads, a non-electrified but thoroughly huge dildo, plus a toy that Lauren and I still call 'the pokey-zappy thing' (sort of like an electric flyswatter, but with just a pair of contacts on the end of it- the person who makes it calls it a 'tzapper'). With all the different ways those can be combined and applied to one person's genitals (poor London- not), plus our good chemistry, we really had a good time.

The interesting stuff with TENS unit play is experimenting with different current paths, and different waveform patterns. The electricity flips nerve switches, and makes muscles contract. So, a hard pulse every half second feels very different from a light hundred-hertz buzz, feels different from an escalatingly-intense *squeeze* as you watch the dial turn up. Then running that current through two poles on a butt plug, or contact patches to either side of someone's clit, or one pole on an electrified speculum and the other on the flat of a knife blade touched to some poor girl's perineum... provokes different sensations. Also, current density changes as the point of contact gets smaller- even a very small amount of current run through the edge of a knife is _really_ intense.

We had good interaction throughout this scene- London is very good about communicating where she's at, both verbally and via various forms of screaming. ^-^ She dropped into a nice headspace over the course of the scene, and at the end was asking me very nicely to please use the pokey-zappy-thing on her inner labia and handling it pretty well. The flash of the spark is very quick, but still shows up on the video probably half the time. The 'pop,' and her reaction, show up every time.