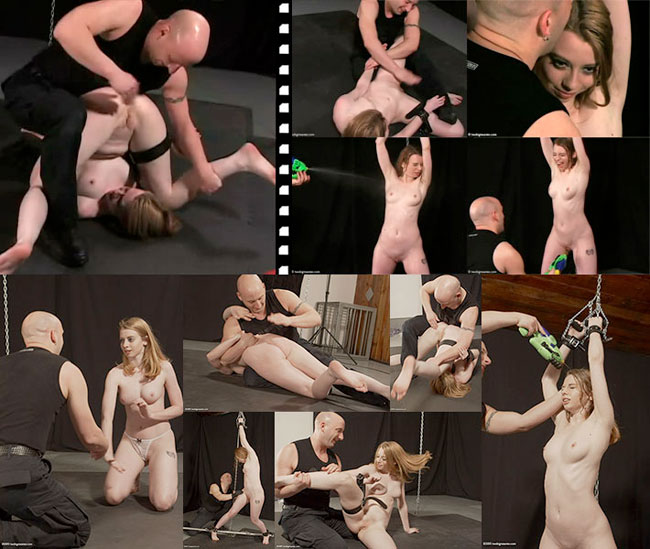 Buy shorts from this here, here, and here,

Nikki and I both like to wrestle. When we did this shoot[*], my last several had been all about wrestling with various people, and Lauren had said 'okay, enough with the wrestling for a little bit!' This was a very off-the-cuff scene, we only chatted briefly about what we might want to do the night before, and were both actually a little crunchy starting off. We've played enough together though that we can find things that work for each other pretty easily. Usually that involves wrestling. ^-^

This, however, was _not_ wrestling. I called it 'wrestling with increasing levels of handicap', but she kept insisting it wasn't any such thing, that it was being increasingly tied up while I took advantage of her. We started out normally, but I think she did a perfectly fine job wrestling (and being taken advantage of with groping, spanking, etc) with one thigh and wrist cuffed together. Eventually we progressed to an ankle tied off to a ring in the floor, then standing with a spreader bar between her legs and her hands cuffed behind her, but she kept struggling! (Well, mostly.)

Incidentally- we took a short break between wrestling on the ground and wrestling vertically. During that break, Kurt (our photographer, and one of her partners) pointed out that when she sticks her tongue out at you, she actually flips it upside-down! She demonstrated again, plus other neat tricks she can do _while_ her tongue's upside-down, but we were too slow to get this on camera. I spent the rest of the shoot trying (unsuccessfully) to get her to do it again- since we hadn't negotiated a resistance scene, she dug her heels in. We'll probably do that again with negotiation beforehand and hopefully you'll get to see it.

(*: We're reposting out of order. The other shoot up so far with Nikki was our first, this is our most recent, there have been several in between.)