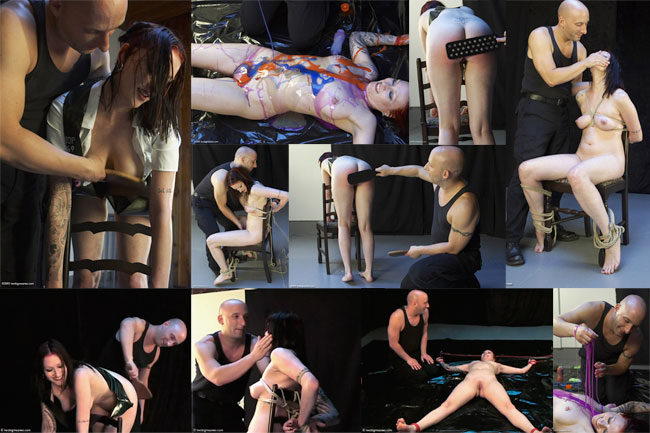 This was kind of a 'theme' shoot- we had a costume and a plot-ish idea so built a scene around it. Joelle and I were talking a few days before the shoot, trying to figure out what we were going to do, and she mentioned having a disposable PVC scouting uniform. We ran with that, and ended up with her earning 'merit badges'. The first was in Material Science (i.e. me hitting her with a variety of paddles, her guessing what they were made out of). The second was Knotwork (her working her way out of being tied to a chair, me providing fun distraction). The last one was Arts and Crafts, which consisted of her tied down spread-eagled and me using some of the most disgusting day-glo slime ever to paint her naked body.

There were a few interesting things about this shoot- one was that we used a guest rigger. One of our camerafolks, Joe, is an accomplished rope top and did the bondage for me. I have to say I really liked it. I'm not particularly a bondage top, I'd just as soon wrestle. Being able to say "I'm picturing a helpless girl, something like this," going away and having a snack, then coming back to exactly what I'd described was pretty neat.

The slime was also pretty entertaining. For one, I'm not sure which of us was more afraid of it, Joelle or myself. For two, we had a few different colors. When they were separate, it looked actually kinda cool and arty. Once I really started squooshing them around on her though, they mixed. The resulting color was a truly horrifying shade of brown that squicked Lauren very much- she didn't even want to watch the video. ^-^ I thought it was hot even with the frightening color, watching the texture of the slime as it moved over her body- great contrast with her really smooth skin.