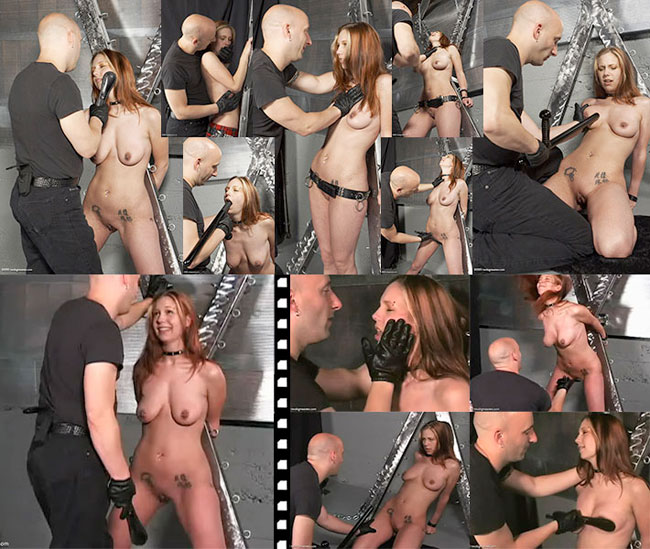 Sadee is a regular (if infrequent) play partner of mine, and one of the first people we shot with. It had been a _long_ time since we'd played, the early shoot (up soonishly) might actually have been the last proper scene we did together. I'd done a scene with someone else off-camera a week or so prior where we just hadn't connected, so I really put a lot of attention into the warmup and creating-connection parts of the scene. It worked extremely well, I think this is one of the top fun-and-connected scenes we've done to date. We've got good chemistry to start with, we did simple and fun things, I was very happy with this shoot.

We played around with some simple bondage- wrists cuffed behind her around a cross, then her on her knees with thumbcuffs behind her back (tougher than it sounds). The main focus was impact play, though. Lots of slapping and punching, a weighted sap, and a riot baton- I'd been saving the baton for a police-themed shoot but I knew how happy it would make her. :)

Sadee really likes having her face slapped- we finished the scene with a challenge. I told her that I'd keep slapping her face so long as she could maintain eye contact with me (brief involuntary blinks from something swinging toward her face aside), and when she broke eye contact the scene would be over . She tried really hard, but eventually bit her lip, looked down, and tears started welling up. When you set up a scene to end like that and someone's trying to be good for you, it's important to let them know they did well- I gave her plenty of aftercare, and we ended a really hot shoot on a very good note.