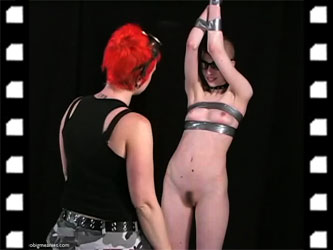 Here's something fun and a little different--a sample of outtakes from the Provoking Ktty shoot.

We like to include outtakes in our video footage whenever we can. Sometimes things don't happen as we plan them, and I think that it's as important to show how we handle it when things go wrong as it is to show everything going right. Also, it's pretty damned amusing. I mean, honestly, the potential for unintended hilarity in any form of sex is pretty high, more so with BDSM, and especially so when you're filming the whole thing. This particular scene had more than its share of Murphy's Law moments. *g* Between a higher than usual amount of the Obstinacy of Inanimate Objects and Ktty's tendency to turn into a wiseass as soon as she thinks the camera's not pointed at her, we got some great material. Enjoy!