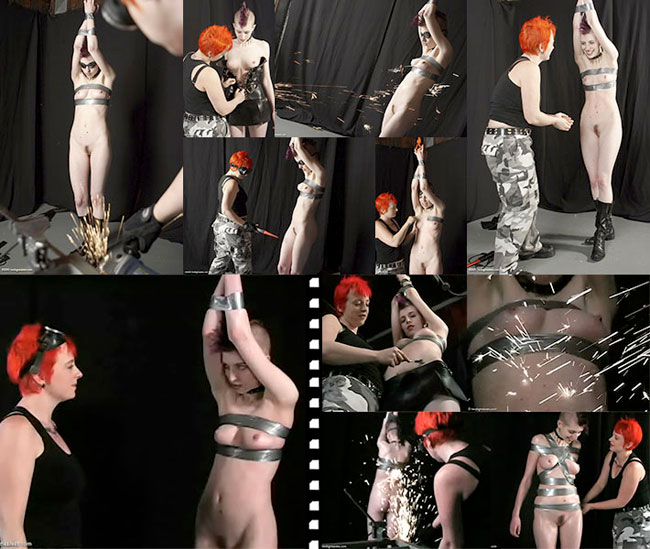 Naked mohawked girl, angle grinder, and duct tape! Yeah, it's kind of a specialty scene, but those are all things I kink on, so we had fun with it.

The first time we shot with Ktty (a shoot we haven't posted yet), we had a very good but very quiet time. She tends to go a bit stoic when the camera is turned towards her. This time, I resolved, I'd get her to make some noise--even if it meant pulling out the power tools. Even then, this tough little cookie didn't crumble much, but I did get some nice, vehement cursing as the duct tape was coming off!

This was a tough shoot in many ways. First off, we had WAY more than the standard amount of Obstinancy of Inanimate Objects. From broken toys to unbroken-but-improperly-functioning tools to structural integrity issues involving a bag of ice, Murphy's law was in full effect. (It made for some endlessly hilarious outtakes, though!)

We started off with me divesting Ktty of a very sexy, very naughty corset. She looked incredible and kinda Amazonian in it, but I wanted her to be able to breathe and to have some skin available for knifeplay! Once that was set aside, I put her in some simple duct tape bondage. It was easy to put on, but as you might imagine, taking it off was another matter...

I tormented her a bit with a toy that Russell and I fondly refer to as the "Poky Zappy Thing" (it appears in a number of our shoots, but if you want to see it used very *ahem* thoroughly, check out the shoots with Claire Adams and London).

Afterwards, we moved on to the aforementioned ice play. That left Ktty shivering, goosebumped, and extremely sensitive to sensation--the perfect state in which to receive a shower of sparks from the angle grinder! With one light turned out, and both of us goggled for safety, we proceeded to give a whole new meaning to the idea of sparks flying between two people.

Removing the duct tape, even over the carefully-baby-oiled skin, definitely got a rise out of my bound girl. Such a rise, in fact, that we decided to do it again. Ktty was still having a tough time with the chill of the studio, so we decided to finish up the scene. I applied even more generous amounts of oil to her bare skin, and then poured hot water over her scalp and down her body...both to warm her up and just to have the pleasure of the aesthetic. *g*

We wound things up by wrapping her in tape, and then pulling it off in as mean a fashion as I could manage - and while conducting the exit interview. I've got to say that I really enjoyed some of the more creative cursing...

This shoot was less kinetic than most of what we do, and I think for that reason the stills capture it better than the video does. The outtakes are some of the funniest we've caught on camera yet, however.