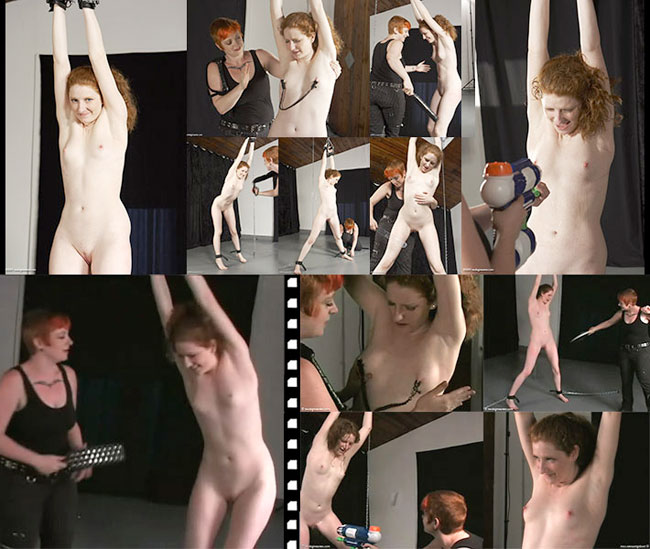 Lucy is, by far, the brattiest brat I have ever encountered. Seriously. I am known, in the circles where I am known, as something of a brat myself, but Lucy puts me to shame. She's a lot of work for any top (which is why the hand and foot bondage), but she's also a lot of fun and cuteness, which more than makes up for it.

This shoot sprang out of a couple of last-minute changes. You can read some of the backstory in the blog entry for "More than a Handful", actually. We'd had to cancel one shoot with an out-of-town model who hadn't noticed that her passport was expired, then stopped another shoot early because Lucy+Nikki+no plan=chaos of a sort that wasn't working well. Finally, we decided that Lucy and I should have a go at it.

I had watched Russell and Lucy shoot a few weeks before, and had learned a couple of things.

She got away with so much in that shoot that I threatened to rename the site "One Big Meanie and One Giant Pushover". (Though to be fair, it was also a VERY hot scene.) I figured that she needed to pay for some of her misdeeds, and that's the idea that we carried through our scene.

I made her name off the ways in which she had misbehaved, and then punished her for each one. There was a lot of impact with whips and thumpy things, a lot of redhead skin turning pleasingly pink and red, and a lot of Lucy testing to see what she could get away with (not much, as it turned out.)

We finished up with some ice water play. We'd shot this in the middle of the summer, under hot lights, so we both needed to cool off! It was intense stuff, though, and it brought Lucy to tears once. By the time we wrapped we were both happy, floppy, and mellow. I THOUGHT. However, Lucy wasn't as tired and docile as she appeared, and I let my guard down too soon...

I won't say any more. Just watch the video. And yes, there WILL be a rematch.